We were reeeeeeally into Dance Dance Revolution (specifically DDRMax2) for awhile, back in 2004. We were introduced to the game by our friends Mike and Chrissy, and lost so badly that we went out the next day and bought not just the game, but a whole Playstation. (I can't say we're not slightly competitive about games. We did the same thing after losing badly at Mario Kart on Wii. And don't even try to beat us at board games!)

Anyway, the good part about getting addicted to a dancing game is the weight loss -- we played for hours every day and I lost 12 pounds in less than a month. The bad part is the stress fractures. (I'm not joking.)

We upgraded to these pads in the hopes that the padding might help our overuse problems, but they just didn't have the same response time so we decided it was better to suffer with the original, unpadded $10 versions. No way we were going to give up our perfect scores for the sake of being able to walk! 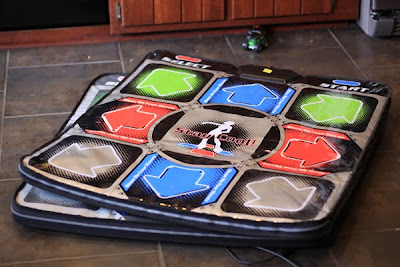