We bought this vintage-style Pottery Barn phone for $10 at a "divorce sale." It was perfect, because it was big enough to cover the ugly patch of unfinished wood on our wall where the previous owners had an actual vintage phone -- a.k.a. old and large.

Maybe the phone had bad karma, because we had it for about three seconds before I dropped the handset on the tile floor. From then on, it sounded like we were using a walkie-talkie on a deserted island. But because it wasn't broken-broken (you could still hear as long as the other person talked really loud and there was no background noise!) we refused to get rid of it. We dubbed it the Hamburger Phone as a shout-out to Juno. ("It's just, like, really awkward to talk on.") The cute nickname didn't change the fact that the phone sucked and we started every conversation by cursing at it.

We decided maybe it would be better to replace it with a less attractive, more functional $7.99 handset from Target. It doesn't cover the ugly spot on the wall, but at least every conversation doesn't sound like KKKRRRRRRPPPPPPFFFFSSSSHHHHHHHHH. 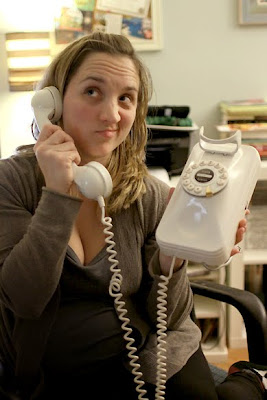 DESTINATION: Trash. About three years too late.
Posted by Kara at 6:08 PM