This pile of videotapes has been sitting on top of our TV for more than two years now. We were reluctant to throw them away, because who knows what priceless footage could be on those tapes?

We finally sat down and watched them. Here's the answer.

1) Several episodes of Heroes. I didn't realize we were so committed to that show.

2) The 2002 MTV Movie Awards, a.k.a. the one when Michael Jackson mistakes a teleprompted compliment from Britney Spears as an "Artist of the Millenium award." I taped them because I was working the red carpet that year, and whenever I had to work the red carpet, I always secretly wished I was home in my pajamas, making fun of celebrities instead of being nice to them.

3) A college film project sent to me by some chick who asked if she could interview me about the teen magazine industry. Needless to say, she was actually creating a scathing feminist critique of how vapid and destructive teen magazines are. Obviously, I disagree. I think it's okay to read about crushes and hairstyles -- in fact, my hair looked like total crap in the video, so maybe I should have skimmed a magazine or two beforehand.

4) The episode of Lost when Naomi dies.

Verdict: Nothing worth keeping. 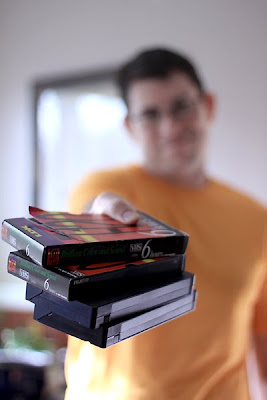 DESTINATION: Trash can.
Posted by Kara at 7:24 PM