I nominated G as the taskmaster since he's good at matching things to their purpose. He said the box of wires "expanded like a pint of lo mein," which is a pretty accurate description. Here's what got tossed. 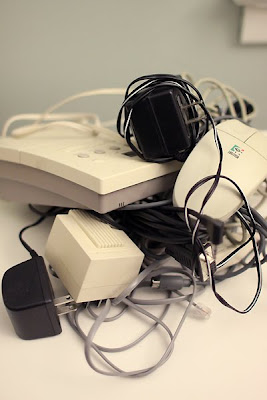 -- one rollerball mouse
-- Walkman power supply (when was the last time I opened this box?!)
-- Nokia phone charger from my first cell phone...in 2000.
-- Lucent Technologies answering machine
-- unidentified serial-to-mini jack
-- Verizon DSL filter (haven't had DSL in five years)
-- seven phone cords in varying lengths and colors (in case we ever were to buy a phone that didn't come with a cord, I guess?)

DESTINATION: Mouse and answering machine to Goodwill, everything else to the trash can. I suppose I could've sent the Walkman charger to Kelly Kapowski, but...
Posted by Kara at 1:06 PM