We inherited this mirror from the previous owners of our house -- it was sitting in the basement along with two air conditioners that were older than I am, and an extra can of the baby-blue paint that they used to paint every single wall, door, and baseboard in our house.

Four years later, we've finally gotten around to selling it. Of course, about three minutes before the woman arrived to buy it, I went to wipe it down and realized the streaks of "dirt" were actually the silver breaking down. It's that old. I felt bad and tried to haggle myself down from the $5 I was asking, but the woman seemed unfazed. I guess that's the difference between people who appreciate antiques and, um, me. 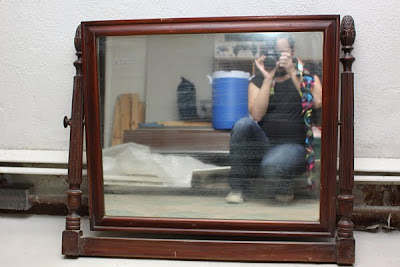 DESTINATION: Haddonfield, by way of craigslist.

(P.S. the reflection of our dusty basement in the mirror gives me agita!)
Posted by Kara at 6:31 PM