The awesome thing about working as a magazine editor is that you basically get all the free makeup you want. Over the course of six years, I probably accumulated a few thousand dollars in cosmetics, even though I rarely left the house in anything but mascara and lip balm. (I used the past tense, but it's still true.)

A few months ago, it occurred to me that I went freelance four years ago (yikes!) which meant my amazing makeup collection was...kind of yucky. Now I'm basically down to my Korres mascara and a few tubes of Blistex (the two products I actually used enough to replace). So I really don't think I need TWO makeup bags. Unless the mascara and lip balm want to keep separate residences.

This one was a freebie with my Aveda travel kit. I'm an Aveda addict, although lately I've been cheating on it with Yes to Carrots. Cheaper, smells better, works miracles. 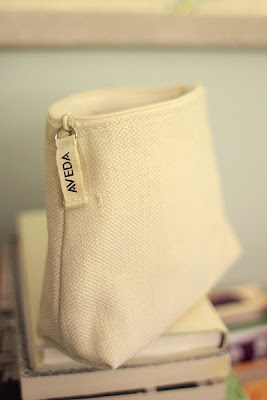