I think the hardest part of having two kids is finding a double stroller that will fit in your trunk. Other people might say "sibling rivalry" or "sleep deprivation" or "a diaper budget that requires a home equity loan" -- but those people obviously do not drive a Mazda Protege5, which has the world's narrowest trunk. It's like the opposite of a clown car -- looks big, but then nothing fits in it.

We managed to find two strollers that fit in there -- the Baby Trend Sit n Stand, and the Baby Jogger City Mini Double. The City Mini folded width-wise and fit easily, but was twice the price. So we bought the Sit n Stand, even though it folded lengthwise and maneuvering it into my trunk was like a game of Tetris (except the bricks are real, and they weigh 27 pounds, and you haven't been to the gym in nine months).

After a few months of cursing and pinched fingers, I gave in and bought the City Mini, which fits in the trunk without any strategizing.* 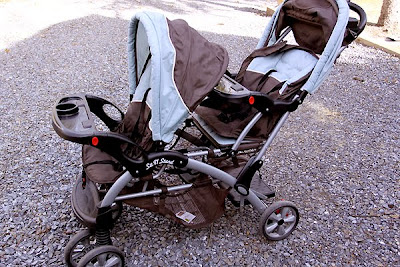 DESTINATION: A rad mom-to-be from Marlton, via craigslist. I was happy to see it go to a good home. And she owns an SUV, so no Trunk Tetris necessary!