True story, I'm a Disney freak. I have Disney pajamas, Disney jewelry, Disney scarves, Disney t-shirts, Disney gym clothes, Disney post-it notes, and Disney stickers. I even steal the Disney paint swatches from Lowe's because I like the cute mouse ears (I just discovered that my niece does the same thing). I've been to Disney World 17 times.

So, when I got this Disney 100 Years of Magic Coca-Cola bottle, I was like, "Yesssss! Add it to the Disney collection!" But I haven't taken it out of the hutch because it's a breakable thing filled with sticky liquid. And I don't actually remember where or how we acquired it -- we wouldn't have smuggled it back from Disney for the reasons mentioned above. (I once had a shampoo bottle explode in my luggage. I'm scarred for life regarding the transport of liquids.) We've been cleaning out the drinkware cabinet this week, so off it goes! 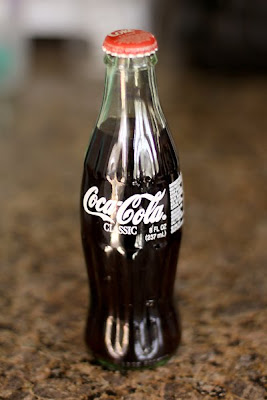 DESTINATION: Recycling. Definitely the cutest thing in the recycling bin this week.
Posted by Kara at 7:29 PM