Remember when I mentioned my scarf addiction? I also have a coat addiction. Basically, I hate winter with every fiber of my being, and I survive it by wearing as many layers as humanly possible. This morning, for example, I was wearing a tank top, t-shirt, flannel pajama pants, a cardigan, and a flannel comforter wrapped around me like a cape. (At least until my niece came to visit, and I felt obligated to dress like a normal human being instead of an abominable quilt-monster.)

So, I have more coats than I can count. I don't even know what coats I have. I'll think, "I really wish I had a leather bomber jacket to wear with this outfit...OH HOLY CRAP! I DO!!" It's like I have a coat fairy, except the coat fairy is me, buying too many coats.

Today I got rid of four coats: a red down vest; a black hoodie that I wore until it fell apart; a denim jacket that should have come with a sell-by date of 1987 even though I bought it three years ago; and a windbreaker with a butterfly on it (why?).

When I started piling on the coats for this picture, G said, "Don't do that." I did anyway. Woohoo! It reminded me of the scene in Friends where Joey says "I'm wearing ALLLLL your clothes!" (Anyone?) 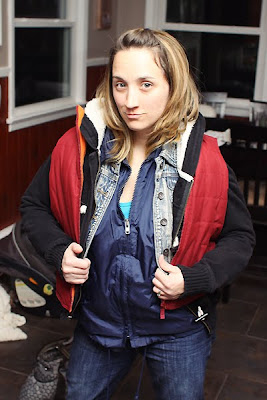 DESTINATION: St. Paul's Episcopal Church in Camden. They run an amazing coat collection and soup kitchen, both of which my brother is very involved in.

1) We had a debate over whether this should count as one post or four. What if we ran out of things later? But I went with four because I wanted them out of the closet, and because I look so awesome wearing all four at once.

2) When I was checking the coat pockets, I found a cute pair of gloves! Bonus! 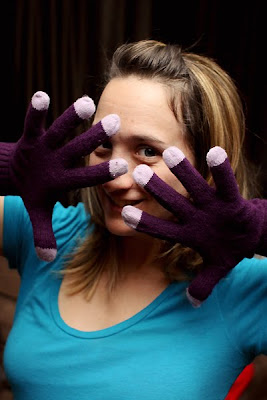