This bin used to hold things. We have fewer things, we need fewer bins. This one drew the short straw because it has no lid, so it's not stackable or dust-proof or kid-proof. Triple fail. (I described it a little more glowingly in the craiglist ad.) 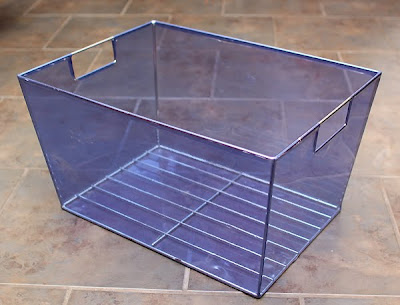 DESTINATION: Someone else's closet, by way of craigslist.

ETA: I'm editing to add that this bin was originally the "gift box" for one of the most useful gifts we ever received -- an emergency supply kit from my brother's family. It was filled with glow sticks, a flashlight, a fire extinguisher, and other items that responsible adults should have in their homes, and we didn't. Just FYI for anyone that needs a gift idea that won't wind up on someone else's 365 dump :)
Posted by Kara at 7:08 PM