Day 35: Requiem for a Dream

Every now and then, I get on these kicks where I'm going to get cultured and watch serious, important movies about serious, important things. It usually doesn't pan out, and I end up watching Superbad for the 85th time. Requiem is one of those movies that people are always telling me I "really should watch," even though they always seem to follow up it up with promises of hopelessness and devastation ("It's so depressing! You'll want to rip your eyes out and un-watch it!")

Despite the fact that I cry at everything, even Taylor Swift videos (the one where he shows up at prom with the note for her? and he's been in love with her the whole time?) (cut me some slack, I was pregnant), I gave in to the pressure and bought this movie. But I've been too afraid to actually watch it, because it might send me spiraling into a serious existential crisis. So you know what? I'M NOT WATCHING IT! I'm going to keep watching the kind of movies I like. Like The Hangover. And Elf. And I've been dying to see Cop Out. 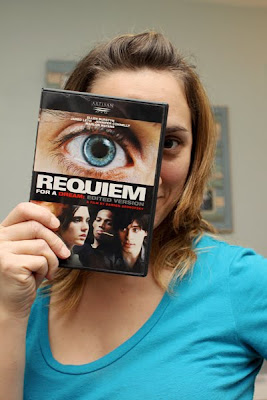 DESTINATION: Goodwill. I actually just noticed that it was the edited version, anyway -- no wonder it was $4. That'll teach me to buy movies from ecampus!
Posted by Kara at 12:17 PM