While I was in my file-dumping frenzy tonight, I came across something I couldn't part with -- at least not until I'd scanned them for posterity -- the maintenance requests from our old apartment.

We actually liked our apartment except for two minor issues: Nothing ever worked, and communicating with the maintenance department was like playing the worst game of "Whisper Down the Lane" ever. We actually started to look forward to getting the work orders, just to see her interpretations of our requests.

Here's a series of six requests in which we attempted to get a wonky stove burner replaced and a broken heater replaced. 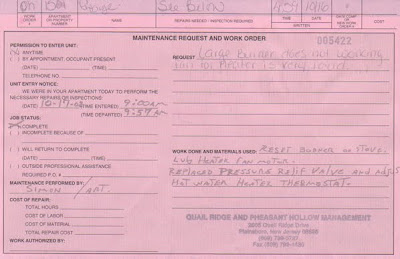 "Large burner does not working. Fan for heater is very loud." Their solution was to jiggle the stove burner until the connector worked again, and "lub" the heater fan motor. I don't know what "lub" is, but I can tell you it did not fix our heater. 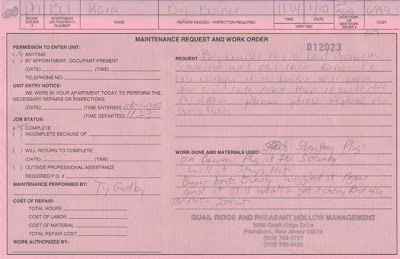 "Big burner has a bad connector....if you wiggle the burner it will work for a half-hour then it will die out again. Please please replace the connector." <-- I appreciated that she transcribed my begging verbatim. Unfortunately their solution was to "Plug it in securely. Will it stays hot....wiggled it again and it still works got it cherry red also." Okay...but...but... 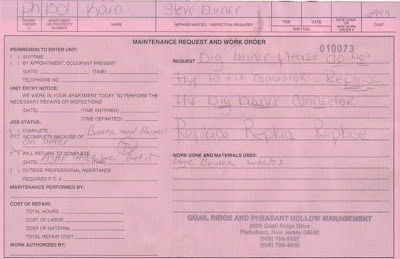 "Big burner please try to fix connector. the . Replace replace replace." <-- I feel like she really captured my desperation in this particular work order. It finally worked. 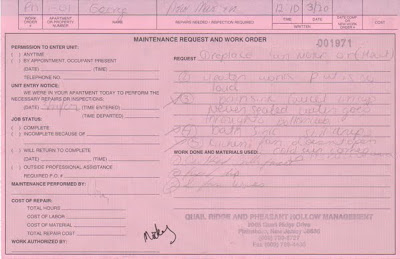 "Heater works but is so loud." With the stove fixed, we decided to focus our efforts on other problems, including the heater which still sounded scary and sometimes refused to turn off. You'll notice they completely ignored the heater on this work order. We put in a few more requests over the next few months, including this very specific one: 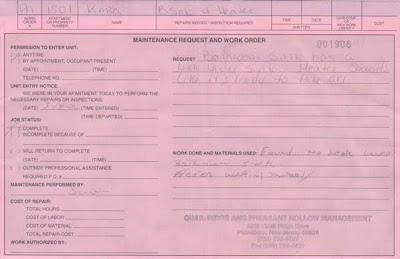 "Heater sounds like it's ready to take off." They determined that the heater was working properly, which was technically true except that it sounded like it was powered by a jet engine. Not too surprisingly, a few months later, it finally had an electrical fire. We called and said (I felt like this was pretty straightforward), "Our heater had an electrical fire." She said, "Are you sure?" I said, "It tripped the breaker, there are burnt wires, and you can smell the burning." Which resulted in our favorite work order of all time: 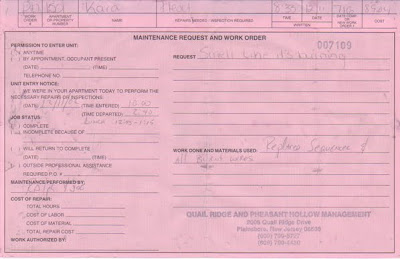 "Smell like it's burning." That was it, in its entirety. If I were writing the work order, I might have mentioned the electrical fire -- but whatever, at least they finally fixed the heater. We didn't renew our lease.
Posted by Kara at 8:57 PM